Researchers at the TU Darmstadt are rethinking photosynthesis

Photosynthesis is considered to be a well-researched process, and its functionality has been sufficiently examined through several centuries of research – one might think so. In an interdisciplinary project of the departments of biology and electrical engineering and information technology at the TU Darmstadt, the knowledge about this process, which has been known for generations, is being revolutionized with current scientific methods. This opens up previously unimagined possibilities for agricultural food production. 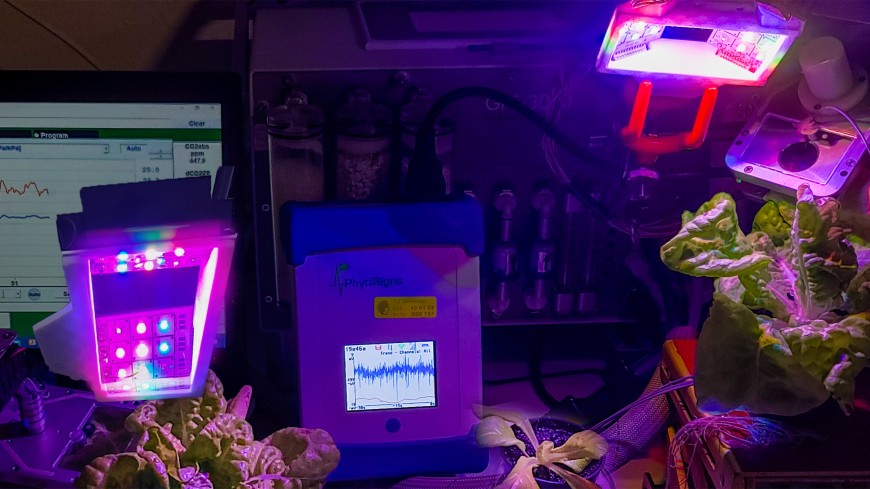 Plants and microalgae use photosynthesis to convert solar energy into biochemically available energy, i.e. into food. CO2 is fixed in the form of sugars and oxygen is released. Almost all of the oxygen in the Earth’s atmosphere is due to it. Photosynthesis is the only atmospheric CO2 reduction process that is of global importance. Photosynthesis has been scientifically studied for almost 400 years. Accordingly, much is known about biology, biochemistry, physics and other connections in this regard.

The creation of models of the photosynthetic processes made it possible to get a picture of the importance of individual factors such as light, water, temperature or CO2 concentration. The models were set up in the form of mathematical equations that can be used to describe photosynthetic processes and to make predictions about the influence of individual factors under controlled conditions. Such models are of enormous importance for the cultivation of plants in agriculture and in greenhouses.

In practice, however, it turned out that the models can only be used well under certain conditions, because complex environmental influences such as wind, drought, temperature and, in particular, the reaction of the affected plant itself are not sufficiently taken into account in the model. Light in particular is one of the factors that have a significant influence on photosynthesis, and the existing models are reaching their limits here.

With the expertise of Department of Adaptive Lighting Systems and Visual Processing (Professor Tran Quoc Khanh) at the Department of Electrical Engineering and Information Technology with regard to LED light and the analysis of photosynthesis by the working group on applied plant science (Professor Ralf Kaldenhoff) in the Department of Biology, lighting conditions were discovered that could not be explained with the existing models: Radiation wavelengths and intensities, which in themselves have no influence on photosynthesis, were suddenly effective in combination with other light colors.

The plant’s response was unexpected and not limited to just photosynthesis. The fact that processes in the plant are comprehensive and dynamic and that changing individual factors have different effects on this complex system is nothing new. It is already being transferred to complex synthetic pathways and regulatory mechanisms in organisms using various computer-aided processes. However, it has not yet been applied to photosynthesis.

As part of the project, the two TU scientists want to redefine photosynthesis in connection with the complex reactions of the plant. To do this, they first set the photosynthesis itself to zero: it is regarded as a “black box”. This is gradually filled with data from the measurements on the plant. Environmental conditions, such as the radiation parameters, are changed, the reaction of photosynthesis to this is determined with precise measuring instruments and incorporated into the model. The aim is to create a dynamic model of photosynthesis using AI algorithms, which becomes more and more accurate as the data input increases through self-learning.

The validated model will have implications for all areas of plant cultivation, including agriculture and greenhouse cultivation. The ambitious plan to understand and re-describe photosynthesis using current scientific approaches can only be achieved through interdisciplinary cooperation at the TU.